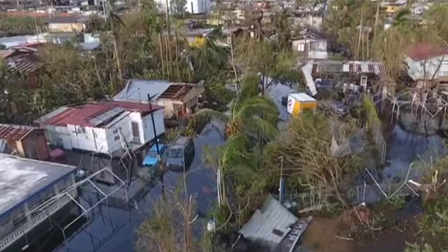 My first thought was for my own family. When Hurricane Maria took aim at the already Hurricane Irma-battered island commonwealth of Puerto Rico I was filled with despair. “How much can these poor people take?”

After being raked by two Category 4/5 storms in just two weeks, the already shaky island infrastructure has been essentially taken off line. There is no electrical power here, except what people are able to make with their generators. Those generators need diesel or gasoline to work, and that fuel in desperately short supply.

The lines at the stations that have gasoline are ridiculously long. The wait exceeds six hours. Vehicles are running out of fuel as they wait their turn to buy only $20 worth. Without fuel to power their generators, people cannot access fresh water. Without water, there are no toilets. Without toilets in the hot and humid conditions that exist here…you get the bleak picture. This is a monumental human and environmental disaster unfolding right before our eyes.

Touring the island yesterday was a bleak, deeply depressing experience. The usually lush vegetation has been scorched by the ferocious winds that gusted at times over 160 MPH. Windows have been blown out of luxury condominiums. More humble dwellings have been stripped of their roofs. The leisure fleets of sail and motorboats that usually attract tourists the world over have been wrecked. I just don’t know how the various governments can bring this island back on line. Cell phone towers have been knocked down. Trees and power lines are savaged by the storm. 70% of the 3.4 million residents of Puerto Rico were already out of power from Irma, and now Maria has blasted through, eliminating the rest of the already shaky power grid.

Only an approach like the Marshall Plan that resurrected Europe in the wake of World War II can save this place known as La Isla delEncanto, the island of enchantment. Bring in the aircraft carriers; import thousands of generators. Recruit linemen from around the United States to rally to the cause of their fellow U.S. citizens. The need is dire.

I wept with relief and concern when I visited my family in the same house I lived in as a 15-year old when our grandparents were alive. But they face the dilemma shared by millions. There is no power and no running water; the schools are closed and businesses disrupted.

Deeply concerned about the humanitarian crisis is spreading over this corner of America, the governor of Puerto Rico, Ricardo Rosello' told me this morning, “the magnitude of the devastation is unprecedented. The infrastructure has been severely damaged. The people of Puerto Rico need the funding that is appropriate to attend to this situation as U.S. citizens.”

Please keep Puerto Rico in your thoughts and prayers. Remember our fellow citizens in need.