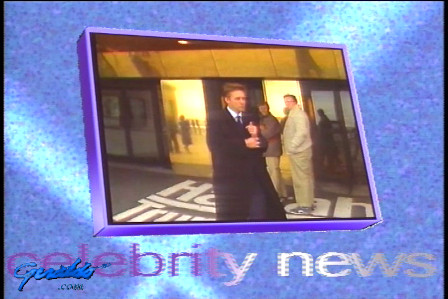 "Welcome everybody to another edition of Celebrity News.  Last week the bombshell exploded over the head of OJ Simpson attorney Johnny Cochran when the two Mrs. Cochrans, his ex-wife and      his mistress revealed his hidden, hypocritical life.  Well this week we get the shocking update as this famed attorned, wait...that's the not the famed attorney that's famous..Donald Trump is coming on the show today, he's the multi-millionaire mogul who made headlines and heads turn and you'll also see Roseanne is coming on the program talking about her wedding which was wonderful, but her two recent setbacks in the area of pregnancy, we got a loaded show.  You're starting with the Pamela Anderson and she's got a new love.  Who's hanging out and hiding out with whom, it's up to the minute,  scraping the minds of those who know, Celebrity News is not to be missed."
This episode of Celebrity News on the Geraldo show looks into scandal surrounding Johnny Cochran, with his common-law wife Patricia Cochran appearing as a guest. The in studio panel includes; Raoul Felder, whom agrees to represent Patricia in any upcoming litigation, Andrea Peyser a reporter for the New York Post, Jamie Brown columnist for Sister to Sister and Donald Trump, New York multi-millionaire and entrepreneur. Donald speaks extensively about his recent major comeback in business and marriage with Marla Trump.