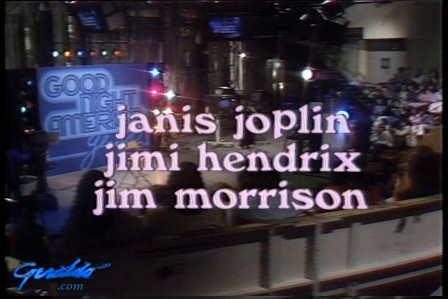 "More than just an epitaph to three rock performers I think this edition of Good Night America is a requiem for the lifestyle of the 60s really we suffered and we experiences so much during that incredible decade..."

The 1960's were the years of hard drugs, hard rockers, and rock o.d.'s. We bring back on film such immortals as Janis Joplin, Jimi Hendrix, and Jim Morrison. Live in the studio to talk about their drug experiences and the long hard road back were top recording artists B.J. Thomas and Grace Slick.