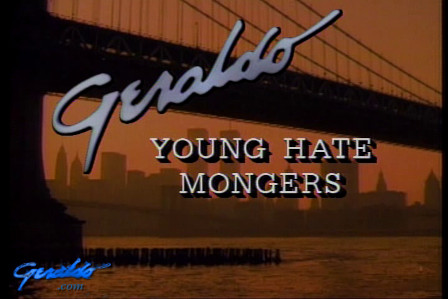 "Our guests that you'll meet today are truly hate-filled, they are self-described racists.  White supremacists.  Nazi lovers.  They admit to resorting to violence if they think it's necessary to get their message across.  But who are their real victims?  Take a look at this man's face.  His name is William Stoct.  He, his wife and their little baby were attacked by five violent skinheads just a few days ago today.  Let me just say that we tried to bring you this show a few weeks ago, but because their hatred begets hatred in others, our guests, the skinheads and their allies were they themselves attacked outside our studio by an angry mob of Jewish radicals.  Now since we refused to be censored by them or by anybody, and because we feel exposure will weaken the following these racists enjoy, today you will hear from these angry young men."

The iconic Talk Show episode with guests John Metzger, Roy Innis, neo-nazis and more. Geraldo does an in-depth interview with the skinheads on-set, until the inner turbulence of those people comes to the surface and ends with most of the audience getting involved in a brawl. The skinheads are eventually carted away and Geraldo, despite the broken nose, continues the show.