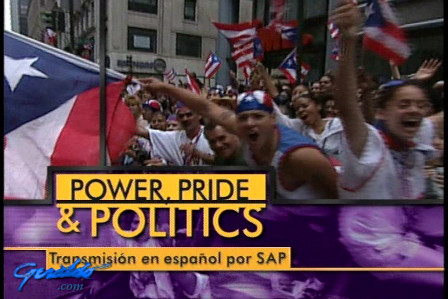 Geraldo reports on the growing latinization of America. Rivera examines the importance of the Hispanic vote for future elections and talks with presidential hopefuls John McCain, Al Gore & Bill Bradley on the subject. He also speaks with politicians from Puerto Rico, boxer Oscar De La Hoya, singer Enrique Iglesias and the Murgia family of Kansas City.

"This is one of the many places where the great Hispanic migration to the mainland of the United States began, the enchanted island of Puerto Rico.  Welcome everybody I'm Geraldo Rivera.  My Dad Cruz Rivera left here in 1940, one of the first wave of Puerto Ricans heading up to New York City.  Like millions of others from Puerto Rico, from the Dominican Republic, from Mexico, from Central and South America, my Dad his family and friends were searching for the American Dream.  Some of them found that dream.  Others though became trapped at the very bottom levels of American society.  Exiled in bayous and ghettos throughout the land.  Many of them experiencing the fear and frustration of confronting racism and poverty.  Feeling alienated, isolated from the very society they had hoped to become a part of.  Too many remain invisible and impoverished to this very day.  But now as never before, Latinos are transforming the face of America.  From the way our politicians campaign, to the way our children sing and dance, in the food we all eat, to the heroes we all cheer for at the ball park.  It's estimated that by the year 2005, Latinos will be the largest minority group in the country.  Challenges and confrontations are arising already, that no one could've anticipated in my father's generation.  Still, as never before, Latinos are enjoying an unprecendented, extraordinary influence on the day to day life of the United States.  Spreading out from the major cities across the nation's interstates, then quiet country roads, into the nation's heartland.  This is Nueva America."
Geraldo is opening his vast library of tapes for your entertainment and edification. He reserves all legal rights to this material, and it is not for rebroadcast without his prior written approval but enjoy the ride.