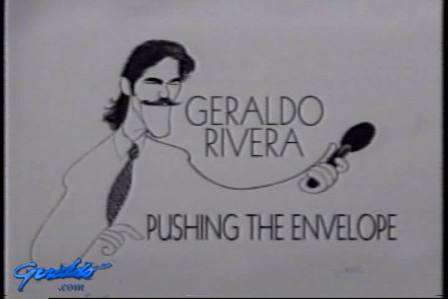 From birth to 1998, a review of Geraldo's life & Geraldo's career aired on the A&E television channel.  Narrated by Peter Graves.
"Geraldo Rivera was unconventional right from the cradle.  His was an unorthodox heritage, both Jewish and Puerto Rican.  Geraldo's father Cruz Rivera was one of nineteen children born to a field supervisor of a Puerto Rican sugar plantation.  It was a hard life and Geraldo's father worked in the sugar cane fields and at other odd jobs before he had enough money to move to New York.  Unable at first to even speak English, the only job Cruz could get was scrubbing pots at a restaurant in Times Square.  That's where he met a pretty young waitress named Lillian Fried
man.  Lillian's parents were Russian Jews, part of the wave of immigrants who uprooted their families to escape religous persecution.  While Lillian announced that she wanted to marry Cruz,
the Friedmans were understandably shocked."