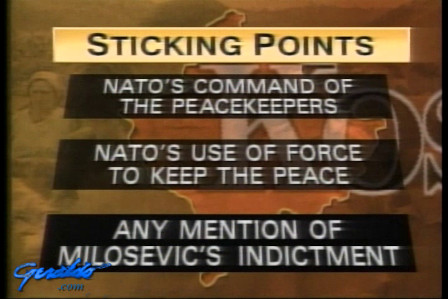 Front lines with the KLA

This show, from Geraldo on CNBC, covers the conflict in Kosovo. At that time the Kosovo Liberation Army, or KLA, was at war with the Federal Republic of Yugoslavia. . Geraldo reports from the front lines.

"What peace?  In the Balkans, the ferocious fighting rages on.  Rebel Kosovo Liberation Army blasting away at Serb troops.  Meanwhile, NATO jets continue to pound targets in Yugoslavia making it clear to Slobodan Milosevic that he can expect stepped-up Allied bombing unless and until he pulls his troops out of Kosovo.  In other words, until he gets serious about peace.  Hi everybody I'm David Gregory joining Geraldo Rivera who is tonight on the ground in the Balkans reporting from Tirana, Albania -- Geraldo, the Serbs say one of the reasons they have not agreed to the NATO plan as drafted so far is that they withdraw their troops, for them, runs the risk, the fear of ambush by the KLA you spent the last few days with the KLA rebels.  Is that true, is it for the KLA, these soldiers, the war is by no means over?"  "I think you're absolutely right David and how can you blame them?  Here are a whole race of people who have been exterminated or driven out of their homes, murdered, raped, pillaged, everything they have in the world stolen from them.."